The Monastery of San Marco: Ladies Are Not Permitted To Enter 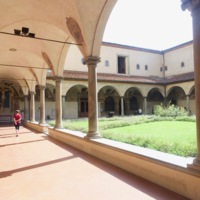 Until 1869, women were not allowed to visit the upper level of the Dominican Monastery of San Marco.
San Marco, in the historic downtown of Florence, is famous for the frescoes by the 15th-century painter Fra Angelico that grace its cloisters, monk's cells, corridors, and public meeting spaces. But because women could not enter the second floor of the complex until the monastery became a public museum in 1869.  women could not look at most of these famous frescoes. They could only access the public space on the ground floor, not upstairs corridors that led to the cells and to the famous library.

This exhibit tells the story of what Anna Jameson, Elizabeth Eastlake, and George Eliot saw at San Marco and how they worked around this prohibition, andwith passages from their public and private writing, with images of the space and the artwork at San Marco. What did Victorian women do when works of art were considered "off limits" to them? What did it mean to look at art when there is a gender script to tell a woman what to see and not see?